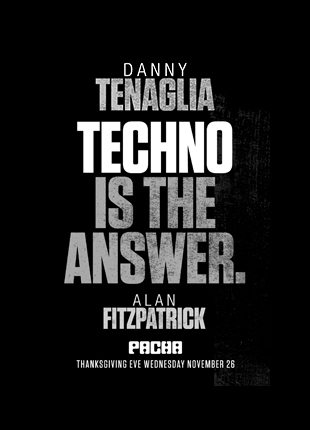 On this day, we offer thanks for everything that we’ve been given: Food. Health. And two DJs who know how to throw down. Be Yourself mastermind, the DJ’s DJ, and one of the greatest resident jocks in New York history, Danny Tenaglia joins techno kingpin Alan Fitzpatrick. These two titans of the booth are matching up for one of the only times in history – and Thanksgiving Eve will never be the same.

Electronic Night Life & RPM are hosting a contest for a pair of VIP tickets to see Danny Tenaglia & Alan Fitzpatrick at Pacha. One lucky winner will receive complimentary admission plus admission for their guest to attend the event on Wednesday November 26th, 2014

To enter please follow us on twitter: https://twitter.com/ElectNightLife RT the contest and then email the following information to euphoriaxnyc@gmail.com and reference “DANNY TENAGLIA” in the subject field. Incomplete or multiple entries will be disqualified.

No purchase necessary to enter the any Electronic Night Life contest. The contest will end on the date stated in the posting and winners will be announced shortly after and contacted through email. This contest is open to participants of 19+worldwide. Transportation is not included. You must present valid ID to enter and claim your ticket. The prizes that may be awarded to the eligible winners are not transferable, redeemable for cash or exchangeable for any other prize. Void where prohibited. Odds of winning depend upon the number of participants.

Originally written for ENL by euphoria

Swedish Musician Avicii Has Died at 28